Different religions and cultures across the named countries have established their own traditions to celebrate the rite, including feasting, visiting family members and friends, and exchanging gifts.

As an ancient national celebration in Tajikistan, Nowruz (Navruz), the beginning day of the year in the Persian calendar, holds the key to friendships and a revival of all nature in the country.

Nowruz celebrations had been held by people from diverse ethnic communities and religious backgrounds for thousands of years in Tajikistan but the rites were restricted by Soviet rule in the country for some years.

However, the country's independence brought a revival of old customs, re-marking Nowruz a symbol of Tajik culture and identity. The Tajik incumbent President Emomali Rahmon has stressed the significance of observing Norwuz traditions, as of 2011.

Tajiks begin their celebrations a month before the spring equinox. The first three days of the last month of the year are celebrated with gathering of family members, relatives or friends sitting around a bonfire, and song, music, and games. This is known as “Hout”, which is the name of the last calendar month.

Nowruz celebrations on the day of the astronomical Northward equinox, which usually occurs on March 21, are called “Khaidir Ayyām” (the big feast) in the country.

"Gol Gardani” [Flower festival] is of specific the other particular Tajik custom. Singing folk songs and dancing, Tajiks hold this festival in honor of spring and the blossoming of nature. Flowers are picked in the mountain foothills, bringing the good news of the end of winter and the beginning of a new agricultural year.

People on Khaidir Ayyām put on clean clothing, symbolizing a complete expurgation. Rituals with fire dating back to Zoroastrian roots of the holiday are obligatory this day.

All family members take part in these and farmers prepare rice, bread, and other special foods for it. As a sign of respect, the elders are also invited to the ceremonies. All household circle round a bonfire or torch alight in sign of good hope against the best. Tajik women prepare "Sumanak", a traditional paste made especially for Nowruz, and the same as Iranians, gather around a "Haft Sin" table to commemorate the new year. 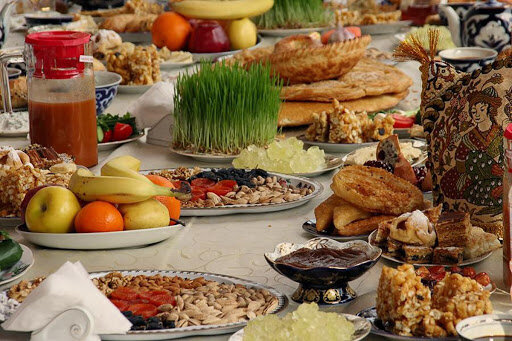 Persian poetry and murmurs of songs in Persian have a special place in Tajik customs for Nowruz.

A good sample of the validity and respect given by Tajiks to Nowruz takes place in Tajikistan Gorno-Badakhshan Autonomous Province, where most of the newly born babies on March 20-21 are named 'Nowruz', 'Nowruzshah' or 'Nowruzgol', the last of which is a girl name.

In general, Nowruz traditions to welcome the spring have been passed on from generation to generation throughout the last millennium in Tajikstan, providing an opportunity not only to enjoy ancient cultural customs and traditions as well as peace and solidarity within towns, cities, and communities.

Even though this year, due to the COVID-19 outbreak, Tajikistan decided not to observe public Nowruz festivities.