In the 14th year of the "Mashhad International Urban Arts Festival" in addition to domestic works of art, it has also hosted international works of art, which begins a new chapter in the artistic manifestations of this metropolis.

Mashhad is a city located in the northeast of Iran and one of the most important cities in the West Asian region. A city measuring ​​351 square kilometers and having a total population of three and a half million is formed 12 centuries ago when Imam Reza (A.S.), the eighth Shia Imam, was buried there. It is now one of the most important pilgrimage cities in the world annually receiving 30 million pilgrims. Among Persian-speaking countries, Mashhad is the pioneer of culture and literature and was called the cultural capital of the Islamic world in 2017.

Providing services for the huge numbers of pilgrims of the holy shrine of Imam Reza (peace be upon Him) in Mashhad by its locals has an ancient history and is filled with memories. It is due to the fact that the necessities of pilgrims hosting have always been an important part of the concerns of urban management in this city. Thus, paying attention to the beauty of public places and using the capacity of art for adding meaning and visual quality to the city led to a series of annual festivals since 2008. "Mashhad Urban Arts Festival" has been turning the city space into a large exhibition of works by Iranian artists such as sculptors, architects, graphic designers, painters, etc. for 13 years during the happy days of Nowruz creating a part of the contemporary memories of Mashhad. Now, in the fourteenth year holding the festival, hosting international works of art is to be added to past experiences and it would start a new chapter in urban arts manifestations in “the Metropolis of Munificence and Blessing”. 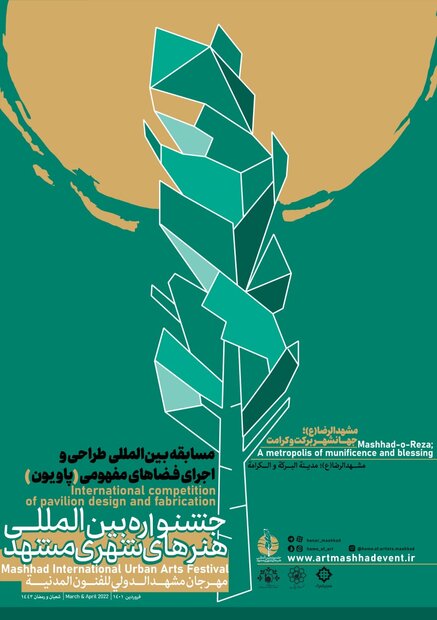 Conceptual and visual structure of works

The Mashhad International Urban Art Festival will host works that deal with the concepts of "Munificence" and "Blessing" in the form of a pavilion for placing in public places of this city. The works of the festival should express one of the two concepts in the external theme and narrate an example of the main themes in the inner layer and confront the audience with a "story" of a specific "subject".

It is worthwhile to present the story and the subject in an interactive way and to use the capacity of all kinds of visual methods, visual and auditory tools or new technologies.

In order to get the artists more informed about the accepted conceptual and visual structure, two following appendices will be published on the festival website by November 27.

Appendix number one explains the content concepts and introduces a number of related subjects.

Appendix number two includes the visual and geographical information about city places having the capability for installing works.