"Jangnameh Gholaman" or as the original title suggested, "The Squires' Account of War; a Farce," is a historical play (1985) written by Iran's acclaimed, veteran playwright and director, Bahram Beyzai, which was produced and directed for the first time by the renowned Mohsen Hosseini in October 2019.

As Hosseini, the director, puts it, he was concerned with the shattered image of Iranian audiences about controversial plays. As if they need to be awakened from an ignorant sleep and reach out to their intact desires and reconcile with the nature of their sublime culture.

On the one hand, the challenge is that the theatre audience can be biased these days, and this is not what theatre is based on. It comes from the fact that for decades such noble works were treated poorly and partially. On the other hand, people are bombarded with a variety of content daily, and winning the crowd's attention sometimes can be a deal-breaker.

The power of social media advertising in Iran

What is evident is that Jangnameh Gholaman was empowered by Zigma8, an Iranian advertising agency, which employed a social media marketing campaign in Iran to promote this play. Zigma8 took the show promotion to a next level of sophistication. The agency went for a particular communication solution by surpassing the traditional digital marketing methods or archaic moves and targeted the key opinion leaders, social influencers, and celebrities who respected elevating the national art and surprised them with a so-called Gift Package. 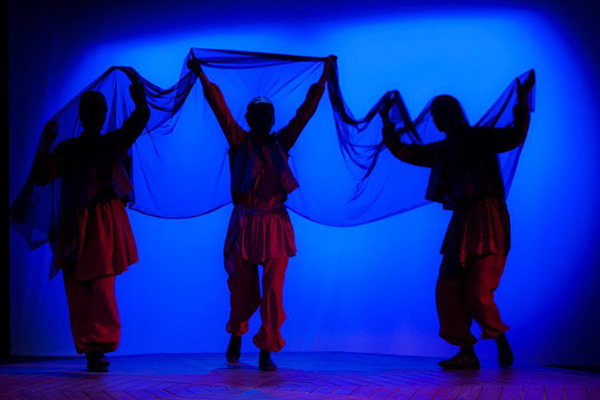 The packages were designed based on the true essence of the play and used authentic historical elements to create a deep connection for those who appreciate art and culture. These packages included a papyrus scroll printed elegantly, the play's full text, a cast/crew brochure, a black theatre mask, and a royally designed invitation to the play shaped as a nested box. The unboxing trend of these packages and revealing their items went viral quickly; especially the theatre mask originated from Thalia Melpomene, the Greek Muses of tragedy and comedy was highly celebrated.

The matter invoked considerable waves of publicity coming from the fans and followers of these selected influential people in different channels by which Zigma8 was able to allure the isolated regular theatergoers and gain a noticeable number of new audiences, which ended up in the show being sold out.

Without the targeted social media advertising and the artistic invitation packages selling out tickets only within a week of them going on sale would have been a dubious goal to accomplish. Consequently, the potent combination of these promotion plans filled the theatre hall with an unpredicted rejoiced crowd. In addition to all the seats being occupied, the walkways were also packed with unexpected show fans.

The early comers were greeted by an informative printed narrative of the upcoming show as they were chaperoned to their seats. Even right before the backdrops opened, people were spotted looking at the promotional materials and discussing what to expect.

Promoting art is not about quantity; it has always been and will be about quality. Therefore, Mohsen Hosseini was equipped to defeat what it was defined as trying in vain. Trusting a team with an immersed sponsoring plan turned to promote Jangnameh Gholaman into a total success. Somehow this will highlight the idea that valuable works of art can still become visible to the crowd if chosen the right path to enthusiasts' hearts.

This significantly opens up a new horizon in front of the other reputed Iranian creative teams to be brave enough to try the unconquered territories and even allows them to go for global attempts. Working to amplify these areas will ensure that cultural and historical theatre is ahead of the curve when it comes to keeping abreast of industry technology and developments. And this would be a promising future for Iranian Theater in the digital world.