Hadi Mohammadian, the promising young director of the animated movie, “The Elephant King”, who claims that his movie has over 60 percent of the quality of the latest works produced by world-renowned companies, has said that Pixar and many other similar companies would consider his movie to be incredible if they knew how a small group in Iran was able to do the project on a tight budget.

He directed “The Elephant King” at the Pooya Honar Group, a small Tehran-based private group that he cofounded in 2007 with a number of his friends and colleagues.

Princess of Rome,a computer-animated movie about the life of a Christian princess, Malika, mother-to-be of Imam Mahdi (AS), the 12th Shia Imam, and granddaughter of Caesar of Rome, was the group’s first full-length movie that Mohammadian helmed in 2015.

Princess of Rome” was ranked the fourth movie of the year in terms of box office receipts by grossing over 5 billion rials.

Now, the 36-year-old director and his colleagues have attended to a fantasy story in “The Elephant King”, which is set in Africa where the leader of the elephants has a baby that is named Shadfil, who must quickly find the courage to be a leader of the elephants. Despite all expectations, Shadfil is clumsy and his bulky figure always causes destruction. 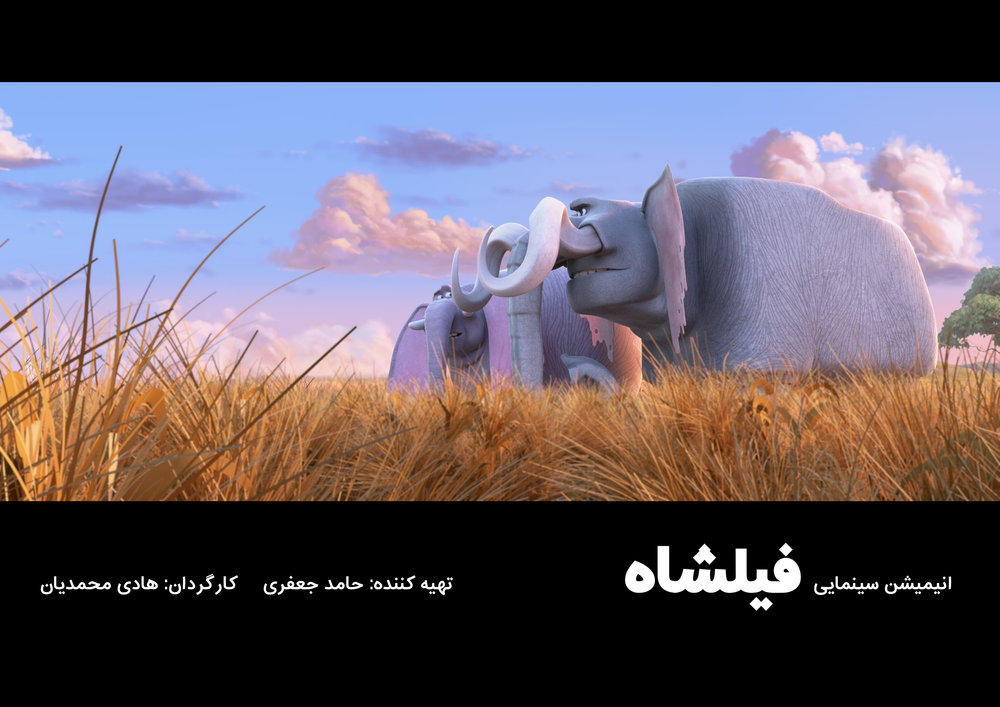 A scene from “The Elephant King” by Hadi Mohammadian

The movie had its premiere on the first day of the 36th Fajr Film Festival in Tehran. It is contending for a Crystal Simorgh at the event.

“People judge our works with the standards applied to those movies that are being produced at many old-line overseas companies… but they should know that, for example, Pixar spent over $200 million to make the acclaimed movie ‘Coco’, while we only spent one-200th of that amount to make ‘The Elephant King’,” Mohammadian told the Tehran Times.

“That sum of money would not even cover their expenditures for coffee and cake for their staff when they were working on ‘Coco’,” he added.

However, he said that he is happy that his movie has been compared with animated productions by major overseas companies. “This attitude pushed us to improve our works over and over again,” he stated.

In “The Elephant King”, Mohammadian followed the common template of a hero’s journey, which is mostly used in Hollywood productions, to write the screenplay along with his colleagues Mohammad-Baqer Mofidikia and Mohammad-Ali Ramezanpur.

This pattern has always been successful and people and children, in particular, get in touch with it easily,” he said.

They wrote the screenplay in consultation with writers and filmmakers Behruz Afkhami, Hadi Moqaddamdoost and Vahid Amirkhani, whom they said are well versed in storytelling in cinema.

As writer and director, Mohammadian said that he failed to narrate the story well in “Princess of Rome”, but “The Elephant King” doesn’t suffer from this problem.

All dialogues, events and the atmosphere in the story have been created based on Iranian culture, so these all seem to help Iranian children feel themselves in the movie, and also empathy with the characters and to enjoy the film even more,he added.

The sound effects for “The Elephant King” were recorded in the United States and the rendering process of it was done in Ukraine.

Rendering or image synthesis is the automatic process of generating a photorealistic or non-photorealistic image from a 2D or 3D model by means of computer programs.

The founders of the Pooya Honar Group are dreaming up a plan to develop their company so that they can complete all the various processes of production within their group.

The group was formed by a combination of three organizations: Pooya Honar, Haft Sang and Soluke Aflaki. Mohammadian said that having box-office success for their productions can help them acquire all the necessary equipment to realize their dream.

“We are trying to live up to the modern standards of the world in animation cinema, but we need time to increase our experience and to develop our team,” Mohammadian said.

“We are at the beginning of the task of laying a solid foundation for modern animation cinema for children so we welcome any one who can help us progress and create a proper atmosphere for children,” he added.

He said that his team in “The Elephant King” has sacrificed themselves to draw children into theaters to enjoy watching a genuine Iranian animated movie.

We did our best and we hope that people back us by taking their children to cinemas to watch ‘The Elephant King’, because we are totally independent and need their support to make better movies for their children,he stated.

We can tell the world proudly that ‘The Elephant King’ is the outcome of the artistic and technological abilities of an Iranian team,he noted.

The founders of the Pooya Honar Group believe that animated movies produced overseas have something in their content that may challenge the indigenous culture in the country. They assure parents that they would never find anything harmful to their children, so they have chosen the motto Bring Your Children to the Cinema with Peace of Mind.